So far I have learned more than I ever thought possible! This last week has been a crash course in parenting 101.  Some of my highlights (sorry that is all I have time for).

-This new little man loves his momma!  He wants to be with his momma all of the time!

-Kai is going to be a cuddler!  On the bus yesterday as we were going to tour the 6 Banyan Tree temple, he decided to lay his head on my chest- just to cuddle.  It wasn’t even close to nap time yet.  At nap time and bed time he would much prefer me to any crib.  He also has no problem with holding on to me when I carry him.  He acts like he was carried a lot and knows what to do, which is very reassuring to me. 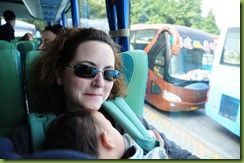 -Kai loves to sing!  He must have had someone sing to him because he is constantly singing the same little tune.  If I hum or sing to him, he will sing back to me.

-He already has me totally and completely wrapped around his precious little fingers.  I have already told him countless times that I will do anything for him and buy him anything (good thing he won’t remember this time right ;)

-He has started a new thing where he likes to crinkle his nose.  He will scrunch up his nose and then giggle.  He especially liked doing this on our plane ride from Zhengzhou with two younger females (early 20’s) that were cattycorner from us.  What a little flirt already! 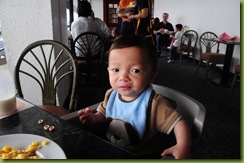 -He has learned to wave and loves to wave hello and goodbye to everyone around us. 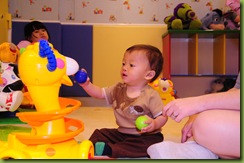 -Kai is super smart!  It take him no time at all to figure out a new toy (even complex ones) and to figure out how to get around whatever we are asking him NOT to do. 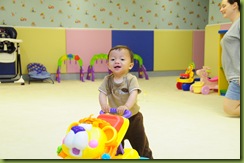 -If he can turn an object into a percussion instrument (anything that you can hit, strike, strum, or bang) he will!  HE IS ALL BOY!  He may just take after his momma with the drums though and that is OK by me.

-He loves to people watch.  He is fascinated by others.  No matter where we are, he can stay entertained for a relatively longtime (for his age) just by watching people.  It’s only a problem at feeding times when we need his attention, but otherwise he is just social and will interact with the people he is watching.

-For right now a bottle can cure just about anything.  There is rarely a time that this boy doesn’t have a bottle in his mouth!  Sometimes he uses it for eating but most of the time he just chews on it.  It is his pacifier. If he gets fussy- give him his bottle.  If he gets tired- give him his bottle. I am not going to fight this one any time soon. It is helping us to have the kid that everyone else envies while we are out and about. They all just think that he eats a lot, and that is fine by me. He does need to chunk up but I am sure that his bottle will be the way to get that done.

-He has no problem sharing things unless it is his mommy’s lap.  He will share his cheerios, toys, bottle- but a little girl tried to climb into my lap in the playroom and he made a direct line over to reclaim the lap. No violence, just lots of whimpering and dirty looks.  It should be interesting to see what kind of arrangement Belle and him work out when we get home.

-Kai is slowly warming up to his daddy.  Just last night they were able to get some cuddle time in and he sat on his lap for Skype calls this morning.  It may be a slow progression (slower than Ray would like) but I see changes in the interaction every day.  Soon enough they will be inseparable buddies.  And Ray is doing AWESOME as a dad!  I know that he is hard on himself, but he is doing amazing! 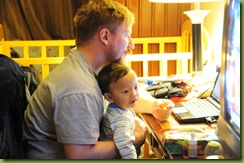 -Many of the locals think that Kai is too pretty to be a boy.  Even the doctor at the physical kept repeating- Oh it’s a boy- in a very surprised tone once the diaper was removed.  His huge eyes and little dimple on his right cheek that just jumps out at you when he smiles are hard to resist. (again this boy has me suckered)

-The things that I was most worried about and the build up of anxiety surrounding these issues- squatty potties, changing diapers while being out in strange surroundings, bonding issues, etc have really not been that big of a deal.  Feeling crummy with terrible mattresses and not getting a good nights sleep is the worst!  I am not much of a complainer (worrier yes, but complainer no) but you try sleeping on the floor (basically on these mattresses) while being 6 months pregnant and see how your back feels in the morning.  Add to that a 17 lb weight that you can’t hand off all day- the exhaustion may just get me by the end of the trip.  BUT would I trade in the momentary discomfort and fatigue for missing out on this trip? NEVER!!!!!!!

I know that I am probably leaving out over a hundred things that I want to remember forever.  I will just have to blame that on the fatigue for now.  Hopefully I will be able to get them all down before the real chaos starts- once we are home.

Posted by Enchanted Rose at 1:34 AM

Nancy I am so grateful for the opportunity to be in the wings watching your journey to parenthood! You are so talented and capable of meeting this little guy's needs...Heavenly Father has blessed you!

It was great talking with and seeing you, Ray and Kai tonight. Thanks for skyping with me. I can't believe that tomorrow you are already heading back home. See how quickly time passes! Love you lots and lots and know that we are praying for a safe and peaceful journey back to OKC!