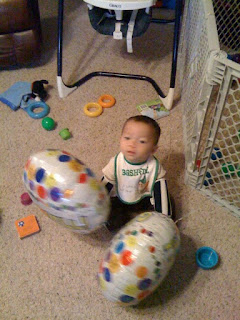 Well we are finished with surgery and we are all doing better at this
point. Kai is happy that je is able to eat some food again (stage one
baby food) and we are happy that he is starting to act more like
himself. The 3 days of liquids only was incredibly hard for all of us.
Kai thought we were starving him. He kept doing all of his signs for
food and pointed to the cabinet where his food is stored. I just wish
that he could understand what we were telling him.

The surgery itself went well. It lasted just about an hour once it
finally got started. He had some post op pain problems and some minor
bleeding the first night. I stayed with him and slept (if you can call
it that) in the reclining chair holding Kai all night. He was given
pain meds around the clock and IV antibiotics along with the routine
vital sign checks, so needless to say- we had some form of company all
night long. I'd take that at any point over hearing him crying out in
pain again though.

When the surgeons came to see him that first morning they thought it
looked awesome. I thought it looked something like raw hamburger but
it was still so fresh of a surgical site. We were able to go home that
next morning with oral pain meds, syringe feeders, and splints for his
arms to keep "foreign objects" out of his mouth. I was just happy to
be getting back to my own house. I MAYBE got 2 hours of sleep all
night and I was ready for my tag team partner to take over.

I have to add that Ray's parents drove up from Houston to help out
before and after the surgery. They were invaluable! Ray's mother did
laundry every day, helped keep the house clean, and helped with meals.
I was also able to get a shower in everyday while they kept an eye on
Kai! (Lately this is a big deal- there just aren't enough hours in the
day to get everything done and I am still figuring out how to be a
mom). I just can't thank them enough for all of their help! They may
not think they did much, but those 30 minutes while you guys had him
in the stroller so I could get stuff done were the best ever, or just
sitting with us while Kai was in surgery so that we weren't alone made
all the difference! Thank you, Thank you, Thank you!

So after we got home from the hospital Ray and his parents took over
so I could get a much needed nap and they got Kai down for a nap as
well. There was a lot of cuddling that first day home. I'm still not
sure who needed it more- Kai or me. Kai's fluid intake still was
pretty minimal but we were getting wet diapers so I wasn't too
worried. That first night home Kai slept part of the night in the
stroller and the rest in bed with us. For the first 3 days it's
important to keep the head elevated 30 degrees to help with swelling
and drainage, so the stroller was ideal for us. We were able to
control the head angle better, and he was on pain meds so he really
didn't care.

The next day our super trooper must have forgotten that he had surgery
because he was ready to go. He wanted to play full speed and eat.
That's when it got hard. He started refusing his fluids to try and
convince us to give him something better. We even called the doctors
office to see if they had suggestions short of force feeding. They
just told us to keep offering the fluids and hang in there until
tomorrow. Little comfort when your little man is screaming from
hunger- not mouth pain. He finally got interested in Carnation instant
breakfast in whole milk from a "big boy" cup. It was a mess but at
least he was taking it! It seemed to fill his belly better than the
apple juice had and he started calming down. At that point I didn't
care how many bibs or outfits we went through. I was just happy he was
taking SOMETHING. That night Ray took night duty so I could sleep and
ended up sleeping in the recliner with Kai for a good portion of the
night. I really do have a great hubby!

Things got a little better yesterday when we could add in stage one
baby food. We are also allowed mashed bananas (Kai's favorite), rice
cereal, and anything that we can get to that consistancy. Now Kai is
eating like it's his last meal! He will scarf down a ton of food and
ask for more. We just hope we didn't take a step backward on the trust
front there. If only he could understand why we are doing all of this!
But with the return of food we are also starting to see a more normal
Kai. He is a touch more clingy but is full of energy and spunk. He is
also loving his balloons from "Aunt" Stacy. Thanks Stacy!

I am hoping that once the first week is behind us and we get closer to
getting his arm splints off we will get back to a completely normal
little man. I might miss some of the cuddle time, but it will be nice
to have this behind us.

Thanks to everyone for your prayers and support during this time of
need! It is getting a little bit better every day!

Posted by Enchanted Rose at 3:35 PM

It is great to hear that Kai is doing so much better. He will soon forget that you tried to starve him! Love you lots and lots.

that is so much to deal with when you are just starting out as a mom. You are a super mom. You are doing a great job. It is great that he is recovering well.

Bless his little heart. He's soooo cute!! Glad he is doing so well. :)

So glad the surgery went well. When my little brother had his tonsils taken out. He wanted to eat so bad, he walked around the house smelling a piece of toast. They just don't understand. I will continue to keep you and your family in my prayers. Take care.
Nicole Hutchings

He is looking fantastic. Congratulations for surviving the first of many medical trials as parents.